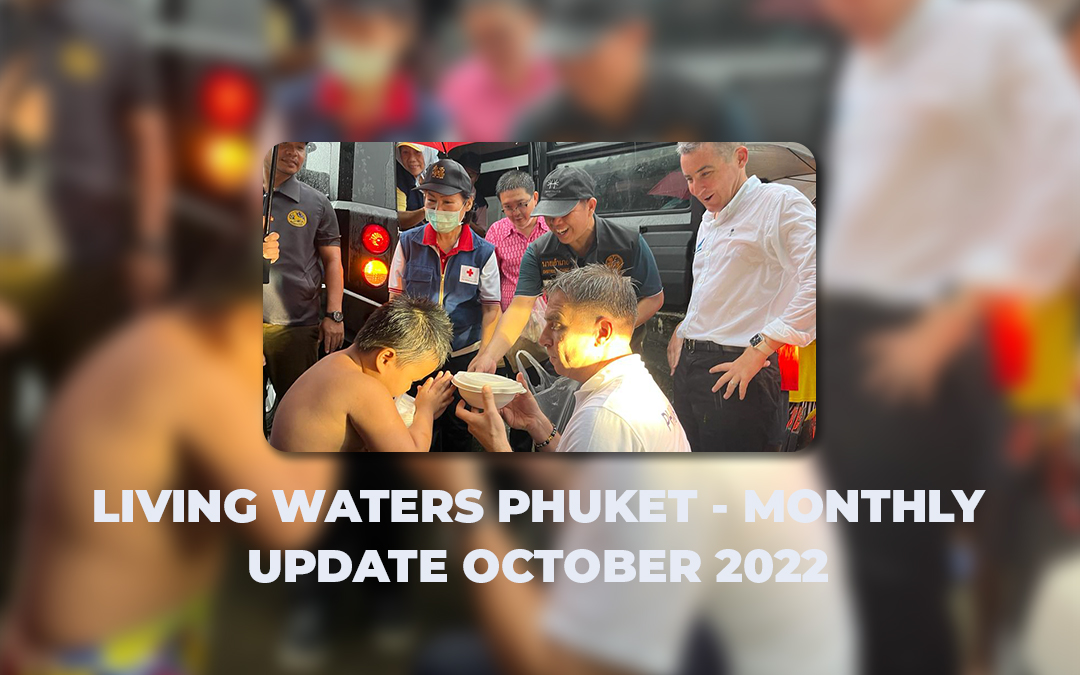 ‘We ourselves feel that what we are doing is just a drop in the ocean. But the ocean would be less because of that missing drop’. – Mother Teresa

Another very busy month for Living Waters Phuket Foundation (LWPF). We thought we had seen the last of life bags but sadly October saw desperate need for them again.

Communities slowly recovering from the economic devastation of the Covid pandemic, were dealt another blow when heavy rain caused destructive flooding across Phuket. Once again the most vulnerable were affected. The rain was relentless and caused landslides, resulting in roads becoming unusable across the island and homes destroyed or made unsafe. Communities who already had very little saw everything they owned washed away.

Thanks to the lessons learnt during Covid, the emergency response to the flooding was fast and coordinated. Phuket has proved it can act as one in a crisis. The government, businesses and residents of all ages, both Thai and ex pat, came together to help those in need however they could. Once again LWPF with 5 Star Marine, found themselves packing life bags and distributing them with other supplies around Phuket. The Thai Red Cross mobilised volunteers and government resources across the island. Hotels, restaurants and individuals cooked and distributed hot meals and donated what they could, from money to clothing and bedding. Temples became dormitories and the emergency services helped keep everyone safe.

Phuket was not the only place affected by unprecedented heavy rains this month. For many provinces across Thailand flooding is a regular but still often devastating occurrence. However for others like Phuket, flooding on such a scale is a rare event. This year Singburi, to the north of Bangkok saw what residents described as the worst flooding in thirty years. Not used to such events, emergency response there was slow. Already helping support flood victims in Ayuthaya and Ubon, iCare Thailand sought LWPF’s help with emergency relief for Singburi. 1000 life bags were supplied but more help is required.

In Phuket and the other provinces hit by flooding, more aid after the initial emergency response is urgently needed. In Phuket a two phase plan was devised. In Phase 1, the emergency response; food, medical supplies, shelter, bedding and clothing are provided. For Phase 2, the emphasis changes from helping people, to helping them help themselves to rebuild their homes and lives. For example hot meals are replaced with non-perishable food supplies and the means of cooking them. School supplies are also needed for children who have lost theirs in the floodwater. They cannot be allowed to lose their education too.

LWPF will continue to work with those affected by the floods in Phuket and to assist iCare Thailand with their ongoing flood relief efforts in other provinces.

“Individually, we are one drop. Together, we are an ocean.” Ryunosuke Satoro writer poet.