While the media is quite rightly focused on the positive changes with tourism opening up in Thailand and the return of international travellers; we are still needed to deal with a high need for Food Security, and this effort was the largest single order of life bags funded and distributed in Phuket in the last 20 months.

The Living Waters Phuket Foundation marked its official launch on the 1st November 2021 with an unparalleled sizeable collaborative food donation programme – the ‘Super Life Pack’ project. This saw over 8,700 bags packed and completed for delivery to Phuket and the surrounding areas.

This was the single largest order of life bag supplies purchased and packed in Phuket in the last 20 months, and was an unparalleled collaborative food donation programme. These ‘Super Life Packs’ were donated to help families in need of basic supplies; and Living Waters Phuket worked together with 5 Star Marine, the Phuket Red Cross, Phuket Has Been Good To Us,The Church of Jesus Christ of Latter Day Saints as well as several government departments on this particular project.

Packs were made up to contain enough staple food items to feed a family of 4 people for 1 whole week. This effort included include a staggering 44 tonnes of rice, along with noodles, tinned sardines, and nearly 9,000 litres of cooking oil and sauces; due to the immense quantity sourcing had to take place from multiple outlets.

3 full days of gruelling packing efforts were needed to finally reach the grand total of 8,738 Super Life Bags. Each day saw a combination of forces working together including the Living Waters Phuket Foundation, 5 Star Marine, the Red Cross Phuket, Missionaries from The Church Of Jesus Christ Of Latter Day Saints, The Governor, the children’s charity Phuket Has Been Good To Us, the Amari, The Marriott, The Pavillions hotel plus volunteers from One Tambon One University as well as other supporting volunteers.

5 Star Marine, with the help of Government officials distributed a proportion of the ‘Super Life Packs’ to the following locations across multiple days, with further distribution slots based on the highest identified need areas: 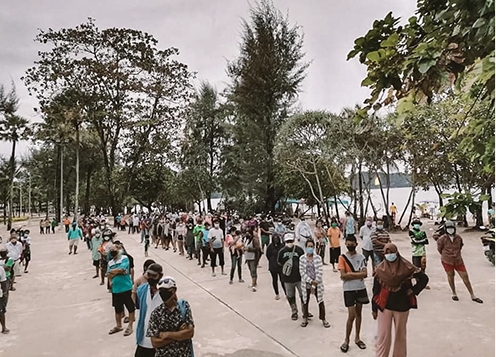 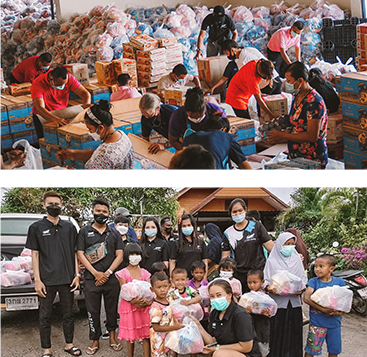 Shaun Stenning, CEO of 5 Star Marine notes: “We do our best to uplift local spirits, and we are managing to help even more than before.  We are currently in one of the worst situations we have been with regards to food relief, but we are still going and with the help of donations towards Living Waters Phuket we can continue to provide grants towards future projects around sustainable food security, education and helping those affected by the Pandemic get back into employment.”